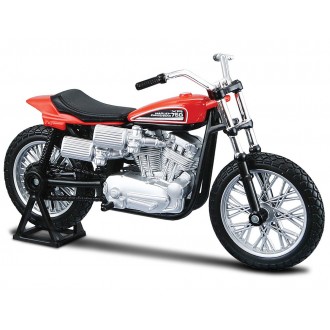 The Harley-Davidson XR-750 is a racing motorcycle made by Harley-Davidson since 1970, primarily for dirt track racing, but also for road racing in the XRTT variant. The XR-750 was designed in response to a 1969 change in AMA Grand National Championship rules that levelled the playing field for makes other than Harley-Davidson, allowing Japanese and British motorcycles to outperform the previously dominant Harley-Davidson KR race bike.

A fine example of this classic motorcycle.
It is complete with card display box.
The model is mounted on a Silver plastic stand with a name plinth which reads - 1972 XR750 Racing Bike