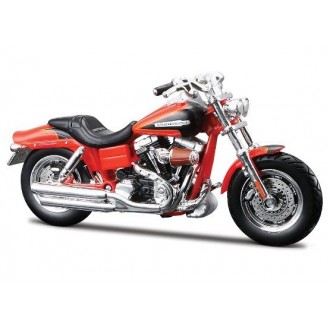 Harley-Davidson stays true to its fame of producing class-leading cruisers with the launch of the Custom Vehicle Operations (CVO) lineup. Among the exclusive 2009 models, the new CVO Dyna Fat Bob is impossible to be ignored, not only because of the new, attractive paintjobs, but also due to the Screamin’ Eagle V-twin motor, which is the largest ever produced by the American company. Can you guess the number of cubic inches on this thing?

A fine example of this classic motorcycle.
It is complete with card display box.
The model is mounted on a plastic stand with a name plinth which reads -  2009 FXDFSE CVO Fat Bob