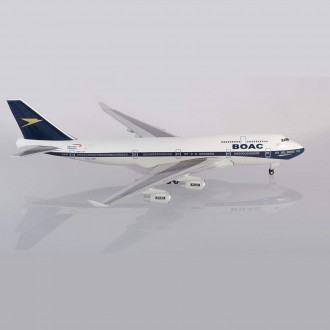 The previous British Airways Chatham Dockyard design has been repainted in 2019 with the BOAC livery which adorned the BOAC fleet between 1964 and 1974. This will last until 2023.

The original variant of the redesigned 747, the 747-400 debuted an increased wingspan, winglets, revised engines, and a glass cockpit which removed the need for a flight engineer. The type also featured the stretched upper deck (SUD) introduced with the 747-300. The passenger model formed the bulk of 747-400s sold, and 442 were built.

Herpa Wings models live up to their big originals in quality, design and fascination. Herpa offer a nice selection of aircraft and accessories such as buildings and vehicles enabling you to build a complete airport or diorama display.  Just like the manufacturers of the originals, Herpa is utilizing the latest technology and quality assurance for development and production.