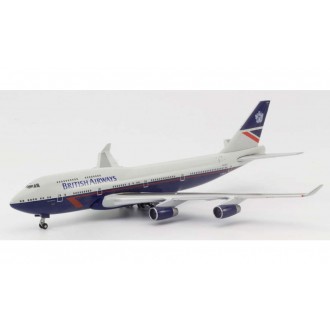 Just three weeks after the Boeing 747 in the historic BOAC livery, British Airways presented a second Jumbo in a historical colour scheme to celebrate its 100th anniversary. The elegant Landor painting was used between 1984 and 1997. British Airways is celebrating its 100th anniversary with the establishment of its predecessor Aircraft Transport and Travel Limited (AT&T), which was founded in 1919 and established the international liner service between London and Paris.

Herpa Wings models live up to their big originals in quality, design and fascination. Herpa offer a nice selection of aircraft and accessories such as buildings and vehicles enabling you to build a complete airport or diorama display.  Just like the manufacturers of the originals, Herpa is utilizing the latest technology and quality assurance for development and production.