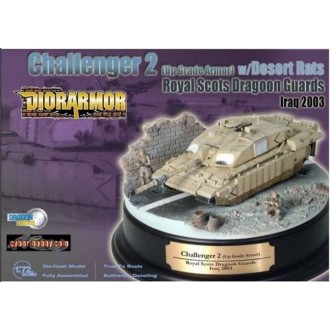 The superb Challenger 2 is the British Army’s Main Battle Tank. The CR2 is based on the Challenger 1 that served with distinction on operations in the Gulf War and the Balkans. Only 5 per cent of Challenger 2 components are interchangeable with its predecessor with over 150 major modifications including a completely new turret, 120 mm gun and second generation Chobham armour. This Up Grade Armour version sits on a diorama display stand with metal title plaque.

The length of this model is 12 cm along the body of the tank.