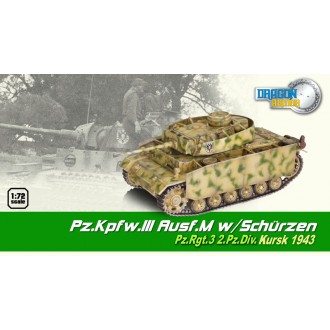 Panzer III Ausf.M succeeded the Ausf.L, and it shared the same 5 cm KwK39 L/60 main gun. Among its modifications was a deep-wading muffler with a series of associated hatch seals that allowed fording of water obstacles up to a depth of 1.3 m. This performance represented a significant fording improvement over earlier Panzer IIIs. The hull-mounted smoke generators were also replaced with three 90 mm NbK dischargers mounted either side of the turret. A total of 250 new Ausf.M tanks were produced from October 1942 to February 1943.

Dragon Armor Models represent highly-detailed, ready-made plastic models of military vehicles. Dragon Armor tanks require no glueing or painting. Each model is an instant display piece or diorama centerpiece straight from the box and is 100% true to scale. these don't look like model tanks, they look like tanks!. Colour, camouflage and unit markings are carefully researched for maximum authenticity.