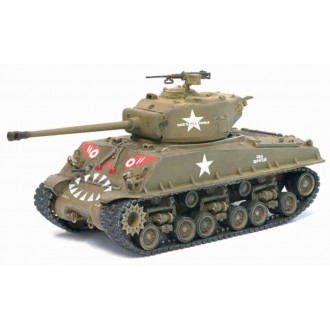 Just such an M4A3E8 tank is depicted in this model by Dragon Armor.   The actual tank is an example from the 89th Tank Battalion fighting near the Han River in 1951.  This battalion participated in ten campaigns during the Korean War.  This fully built and painted tank is finished to an exacting standard along with the colorful and accurately reproduced markings of this unit.  The tank has received mouth and eye markings in order to intimidate enemy combatants.  This is a powerful asset in the Dragon Armor range, and collectors will appreciate the detail and markings.

The Korean War was fought between 25 June 1950 and 27 July 1953, when a shaky ceasefire was signed.  This bloody conflagration came hot on the heals of WWII, and it essentially pitted western countries against communism.  Unsurprisingly, the USA employed equipment that dated back to WWII usage.  One such tank used during the Korean War was the Sherman M4A3E8 with it's thicker armor, and long barreled 76mm gun.  The Sherman entered combat in December 1944, and there were plenty around to fight North Korea and Chinese forces more than five years later.