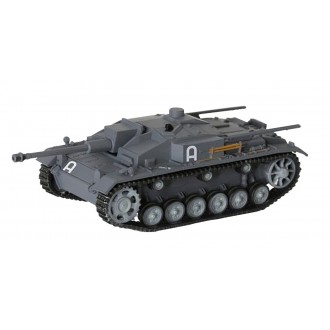 The Sturmgeschutz III StuG.III has the distinction of being Germany's most widely produced AFV of World War II with 10,619 eventually being manufactured. Based on the chassis of the Panzer III, it was cheaper and faster to build since it did not have a rotating turret.

Dragon Armor Models represent highly-detailed, ready-made plastic models of military vehicles. Dragon Armor tanks require no glueing or painting. Each model is an instant display piece straight from the box and is 100% true to scale. Colour, camouflage and unit markings are carefully researched for maximum authenticity.

This model is about 8.5 cm long and is presented in a clear plastic display case.