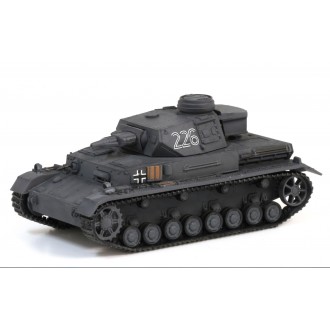 The Panzer IV Sd.Kfz.161 formed the mainstay of German Panzer Divisions and it holds the distinction of being the only German tank to remain in production throughout the course of World War 2. This tank was the most produced tank in the German Army with 8500 made with many improvements to it’s armament and armour protection over the years of the war. The Panzer Ausf. F1 was manufactured from April 1941 to March 1942. Armed with a short-barreled 75 mm L/24 gun a total of more than 45 were produced although a number were later converted to F2 status. Other distinguishing features were a new turret design and wider tracks.