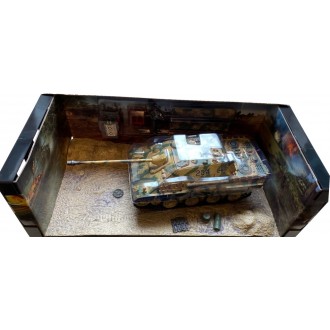 The Jagdpanther (German: hunting panther), SdKfz 173 is a tank destroyer built by Nazi Germany during World War II based on the chassis of the Panther tank. It was powered by a Maybach HL230 P30 V-12 petrol engine, which produces nearly 700 PS, offering a maximum speed 46 km/h. It entered service in 1944 during the later stages of the war on the Eastern and Western Fronts. The Jagdpanther combined the 8.8 cm KwK 43 cannon of the Tiger II and the armour and suspension of the Panther chassis.