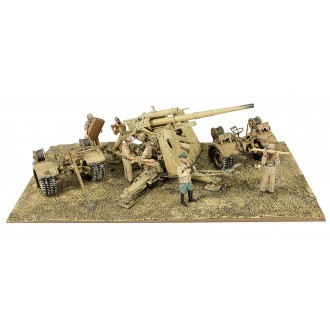 Originally developed as an anti-aircraft gun, the 8.8cm FLugzeugAbwehrKanone FLAK was first employed in the anti-tank gun role in 1936, when the German Condor Legion was testing out its equipment during the Spanish Civil War. Amazingly, German war planners had designed the gun as an AA weapon with a heavy cruciform platform and central fire control operation, not as a multi-purpose anti-tank gun with proper anti-tank sights. Nevertheless, its capability was seen and quietly noted by commanders operating in the field. While the gun was occassionally used in the anti-tank gun role during the Polish and French campaigns, it wasn't until the Afrika Korps joined battle in Cyrenaica with the British Eighth Army that the 88 really showed its prowess as a tank killer. Here the tactical situation was such that it was possible to deploy the guns in their anti-aircraft role in positions that would allow them to be re-trained as anti-tank guns. Their range and penetrating power enabled their crews to dispose of British tanks long before the enemy was close enough to engage the guns with their own two- or six-pounder guns.

This rendition of the flak gun comes with four wheels and a tow hook so that it can be attached to a Sd. Kfz. 7/1 prime mover to form a two-piece set. Both sets of wheels can be removed so that the gun, mounted on a cruciform platform, can be set up in a firing position. The gun elevates and fully traverses and comes with seven crewmen and Erwin Rommel figure. Produced with all the quality you've come to expect from the entire Forces of Valor range.

This model is 17cm long.