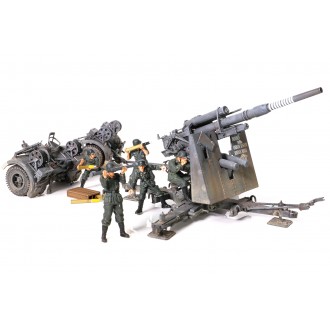 The German 88mm anti-tank gun became infamous during WW2 for its ability to not only target allied armoured units but also aircraft and warships. This led to the technology and design for the 88mm being worked into the Tiger tank series mighty weaponry. In post war interviews with allied troops it was claimed the 88mm Flak Gun was an unfair weapon to be deployed in ground warfare.

The Forces of Valor brand began way back in 2002 with our incredible 1:32 scale Combat Proven Machines line up. Put simply, they are the cornerstone of our entire range and will likely represent the heart of our business for years to come. Hand painted and meticulously detailed, our revamped range has been retooled accordingly, making use of the latest research and information.

This model is 20cm long.