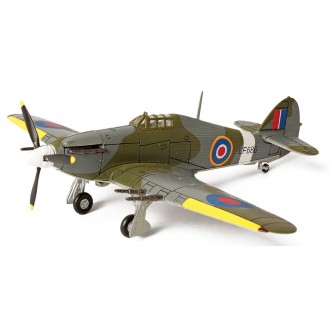 This Forces of Valor Hawker Hurricane Mk. IIC - RAF LF686 was built at the Langley factory, near Slough, Buckinghamshire, just six miles from what is now called Heathrow airport, and features incredible detail in diecast metal and plastic construction. The solid metal wing has four detailed cannon barrels. The landing gear is a separate assembly with structural details inside the wheel wells for display on the runway. Also included is a stand for display in flight.  The detailed Rolls Royce Merlin engine can be viewed under the removable top engine cowling covers.

Hawker Chief Designer Sydney Camm's Hurricane fighter ranks with the most important aircraft designs in military aviation history. Hurricanes proved vital to win the Battle of Britain during the summer of 1940, when the Nazi Blitzkrieg seemed unstoppable. These airplanes also performed other roles flying on nearly every front until the end of the war. The Hurricane was the first British monoplane fighter aircraft, and the first British fighter to exceed 300 mph in level flight.

This superb model replica is made from die cast metal and plastic and can be displayed on the included stand with landing gear raised or lowered.

This model is approx 13.cm long with wingspan of 16cm