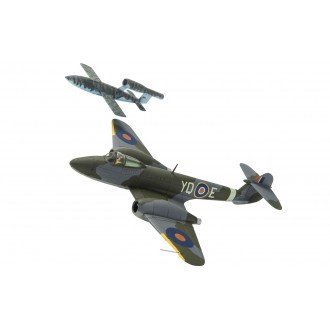 The Gloster Meteor was the RAF’s earliest jet fighter. It entered service with No.616 Squadron in July 1944 originally charged with destroying the V-1 flying bombs that were being sent indiscriminately in the direction of southern Britain.  The first Meteor victory over a Doodlebug occurred on the 4th August 1944, when Flying Officer T.D ‘Dixie’ Dean spotted a V-1 flying in the direction of Tunbridge Wells.  Placing his Meteor EE216 in a shallow dive to build up speed, he lined up the V-1 in his gunsight and fired – after a short burst, all four guns jammed.

Dean was determined not to let the Doodlebug get away and manoeuvred his Meteor alongside the flying bomb, wing tip to wing tip.  When he was positioned as close as he safely could, he flicked the control column of his Meteor and banked sharply away – the sudden airflow disruption caused the V-1 to go out of control and crash without causing injury on open ground.  Dean had the first Meteor victory over the V-1 and was the first pilot to use the risky ‘tip and run’ tactic to destroy one these feared flying bombs.