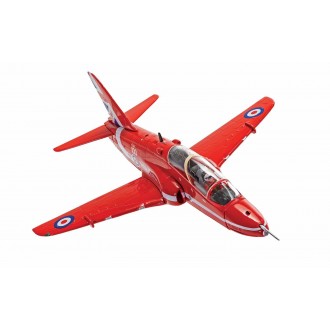 As the Royal Air Force prepared to mark their centenary year in some style, there was no doubt that the world famous Red Arrows would have a significant role to play throughout 2018. Coming at the end of an intensive period of winter training, every Airshow event and ceremonial flypast would hope to boast an appearance from the Red Arrows during the RAF’s centenary year. This would see the team undertake a punishing schedule of more than 60 displays, performing to millions of enthralled spectators all over Europe. The famous red BAe Hawk T1 trainers used by the team represent one of the most successful British aircraft of the post war years and have been the mount of the Red Arrows for an impressive 38 display seasons, taking over from the Folland Gnat in 1979, with their first Hawk displays performed the following year. To mark the centenary year of the Royal Air Force, the distinctive Hawks of the Red Arrows benefited from an additional RAF 100 logo above the roundel, identifying the aircraft as those taking part in these historic commemorations.

Corgi Aviation Archive are a range of high quality detailed die-cast model aircraft. Each model comes complete with an individually numbered certificate of authenticity detailing the significant history of each aircraft.

Option to display with landing gear up or down.

This model has a wingspan of 13cm.