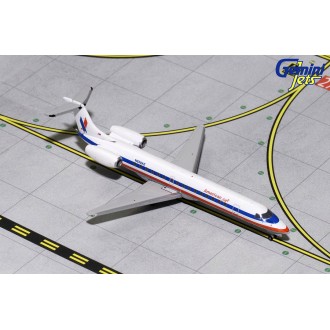 American Airlines is a major U.S. airline owned by AMR Corporation, headquartered in Fort Worth, Texas. It operates an extensive international and domestic network, with scheduled flights throughout North America, the Caribbean, South America, Europe, and Asia. Dallas International Airport is the airline’s largest hub, with American Airlines and AMR’s regional carrier American Eagle accounting for about 85% of the traffic and 83% of the landing fees at the airport and traveling to more destinations than from its other hubs.

The Embraer ERJ family is a series of twin-engine regional jets produced by Embraer of Brazil. Aircraft in the series include the ERJ135 - 37 passengers, ERJ140 - 44 passengers, and ERJ145 - 50 passengers, as well as the Legacy business jet and the R-99 family of military aircraft. Each jet in the series is powered by two turbofan engines.

This model is approximately 8cm in length, with a wingspan of 5cm.