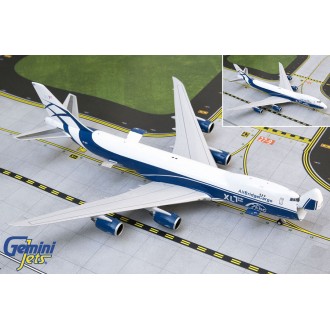 The Air Bridge Cargo B747-8F with optional nose cargo door and fuselage cargo doors is part of the Gemini Jet's Interactive Series. The nose and cargo doors may be displayed open or closed.

The Boeing 747-8 is a wide-body jet airliner developed by Boeing Commercial Airplanes. It was officially announced in 2005. The 747-8 is the third generation of the 747, with a lengthened fuselage, redesigned wings, new engines, and improved efficiency. The 747-8 is the largest 747 version, the largest commercial aircraft built in the United States, and the longest operational passenger aircraft in the world.