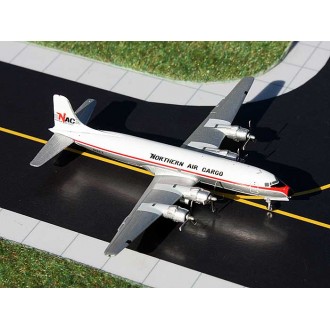 Just after World War 2 there was a growing demand for commercial air travel. The DC-6 was tailored to be a military transport aircraft (known as the C-118) but as the war ended, Douglas quickly realized that it would have to turn to the commercial market instead. The DC-6 first flew in February 1946 with deliveries to airlines commencing in November of that year.  The DC-6 saw enormous success over the years with the early model DC-6 giving way to the later DC-6A & DC-6B with featured many upgrades, including more powerful engines, more range and a 5 foot fuselage stretch.

This model is 8cm long with a wingspan of 9cm.