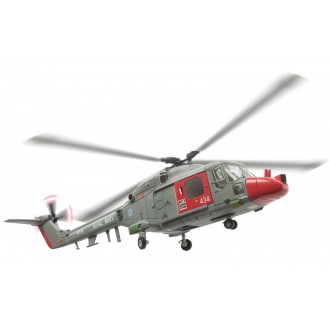 Westland Lynx HAS 3 ICE XZ238 (434/EE) is one of a number of helicopters, which have served on board Antarctic survey and ice patrol vessel HMS Endurance, in particularly challenging conditions.  For this specific role, some of the equipment usually found on Royal Navy Lynx aircraft was removed, but the reliable Lynx proved to be essential in the effective polar operations of Endurance. Two ice modified Lynx aircraft were usually carried on board HMS Endurance, at any one time.

Since the Westland Lynx was introduced in 1978, it has proved itself as one of the most advanced and capable helicopters in the world.  Fast and highly adaptable, the Lynx has the distinction of being the world’s first fully aerobatic helicopter, capable of performing some quite astonishing manoeuvres. A true multirole combat aircraft, the Lynx is also a deadly tank destroyer and submarine hunter, due to remain in British service for many years to come.

This model is 16cm long.