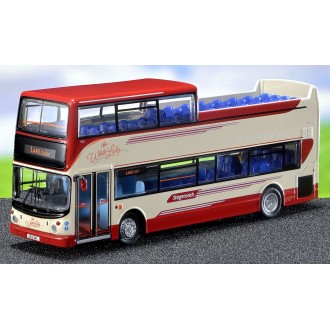 Following the significant success in re-launching the casting of the Alexander ALX400-bodied Dennis Trident, Northcord Model Company is now releasing the second livery on the casting - UK1502, a replica of an open-top ALX400-bodied Dennis Trident in the fleet of Stagecoach North West with Ribble White Lady heritage livery. UK1502 represents fleet number 17012 (S812 BWC). 17012, or TA12 originally, was part of a batch delivered new to Stagecoach East London in 1998 and these were some of the first low floor double-deckers to operate in London. 17012 – 17024 started to migrate North in 2003 when they transferred to Stagecoach North West and were allocated to Morecambe depot. None was used in service at Morecambe in dual door format until after single door conversion at Lillyhall depot and then repaint at Carlisle depot and the majority were branded for services 2/2A (later baylink 2/2A) converting the route to low floor operation at the same time. 17012 – 17016 then moved on again towards the end of 2008 where they were once again sent to Lillyhall depot for conversion but would this time lose their roofs and be repainted into a green variation of Stagecoach livery for use at Kendal depot on Lake District service 599. This bus is fitted with a tachograph and has been used for hires in the past. To try and further expand this hire work and to make the bus fit in better, it is either used with, or as a replacement for the Routemaster.

Stagecoach Cumbria & North Lancashire have painted the bus in a special livery, naming it the White Lady. This inspiration for the White Lady comes from a number of buses Ribble, one of the precursor companies to Stagecoach CNL Lakes operation, bought in the early 1950’s. These were buses fitted with coach seats and various other embellishments, they were used on express services out of Manchester. The buses were painted in a reversal of the standard Ribble livery which used Ribble Red as a base colour. Because of the reversed livery they became known as White Ladies, even if their base colour was actually cream. The White Lady has been designed by Ray Stenning of the Best Impressions design agency and is very much inspired by the original rather than being a slavish copy of it. The ALX400 open-top replica features excellent detailing inside and out. This is a one-piece casting whose clean lines enhance the livery application on which all logos and lettering are clearly legible. The interior plastic blister has been redesigned to ensure the secure positioning of the model on the plinth by following the shape of the White Lady open-top model.

The ALX400 open-top replica features excellent detailing inside and out. This is a one-piece casting whose clean lines enhance the livery application on which all logos and lettering are clearly legible.