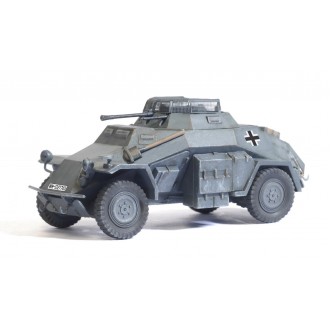 The Leichte Panzerspähwagen Sd.Kfz.222 or roughly translated ‘Light Armoured Vehicle Model 222’ was part of a series of light 4 x 4 armoured reconnaissance ‘Aufklärungs’ vehicles, designated ‘Sd.Kfz. 221, 222 & 223’ produced by Germany between 1935 to 1944. Because of the restrictions imposed on Germany as part of the Versailles treaty after World War One normal military research suffered greatly to the extent that the Germans were forced into development of arms not covered by the treaty as a means of military advancement.

The model beautifully captures the look and stance of the 4x4 light armoured vehicle. The vehicle is finished in the standard Panzer grey colour of German vehicles from the early-war period, while small details like the "WH" license plate are also present.