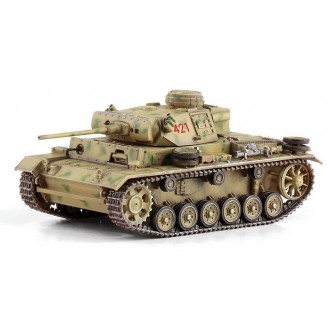 The Panzer III was a medium-class tank that, at the outbreak of WWII, was designed to be the primary platform of Germany’s all-conquering Panzer Divisions. However, with the advent of more heavily armored and up-gunned enemy tanks, the role of the Panzer III became secondary to that of the Panzer IV. Production finally ceased in 1943. One of the later models to be produced was the Panzer III Ausf.L, which featured a longer and more powerful 5cm KwK 39 L/60 main gun. It also boasted thicker armor, with an additional 20mm-thick layer on the turret and hull front. A total of 653 Ausf.L tanks were produced in 1942 by German factories.

This highly detailed plastic model is expertly pained and includes a rotating turret.

The model is about 8cm long and is presented in a clear plastic display case.