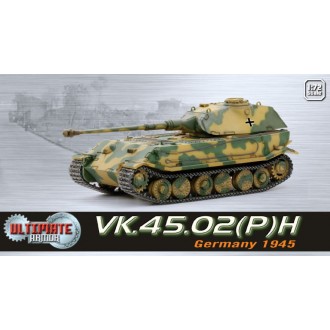 Dr. Porsche was a vital figure in terms of German armoured fighting vehicle development during World War Two.  Unfortunately, not all his ideas met with success, with the VK450(P) being a prime example.  After its failure, he nevertheless designed an updated version known as the VK.45.02(P).  He actually proposed five different versions, with four different types of engine and both forward and rear mounted turrets.  The heavy tank turret was designed by Krupp to mount an 8.8 cm Kwk43 L/71 gun, and it featured a rounded front for better ballistic qualities.  VK.45.02(P)H prototype had the Krupp turret mounted well to the rear of the hull.  The hull also carries the Porsche turret later assigned to the Tiger Two.

This model is about 10 cm long.