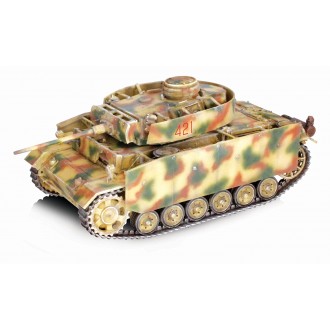 Panzer III Ausf.M succeeded the Ausf.L, and it shared the same 5 cm KwK39 L/60 main gun. Among its modifications was a deep-wading muffler with a series of associated hatch seals that allowed fording of water obstacles up to a depth of 1.3m. This performance represented a significant fording improvement over earlier Panzer IIIs. The hull-mounted smoke generators were also replaced with three 90 mm NbK dischargers mounted either side of the turret. A total of 250 new Ausf.M tanks were produced from October 1942 to February 1943.

This model is 8 cm long and is presented in a clear plastic display case.