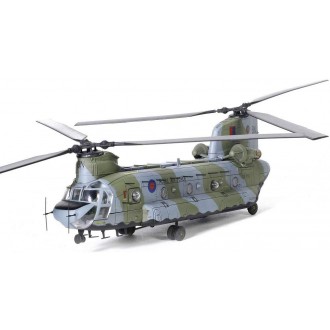 The Boeing Chinook is a twin-engine, tandem rotor heavy-lift helicopter. With a top speed of 170 knots. The Chinook was designed and initially produced in the early 1960s. The helicopter is now produced by Boeing Rotorcraft Systems. Chinooks have been sold to 16 nations with the US Army and the Royal Air Force being the largest users. The Chinooks of several nations have participated in the Afghanistan War and despite its age is still in heavy demand.

This superb Forces of Valor replica of the Bravo November ZA718 is made from die-cast metal with plastic parts. Features include Rotatable Spinning Blades, Full Interior Details, Moveable Rear Access Ramp and Sturdy Display Stand. Beautifully presented in a display box this model is a must for aviation and military collectors.