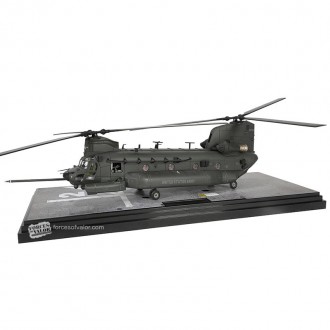 Following the tradition of naming U.S. Army Army helicopters after American Indian tribes, the CH-47 Chinook was named after the Chinook Indian People of the Pacific Northwest in present day Washington and Oregon States.

In 1960 Boeing purchased Vertol Corporation, then the world's largest independent manufacturer of helicopters. As Boeing Vertol, the company focused on tandem-rotor helicopters and was responsible for the development of the successful CH-46 Sea Knight which first flew in 1961. Despite the success of the Sea Knight the US Army was still seeking a heavier transport helicopter, and ordered an enlarged derivative of the CH-46. This led to what ultimately would become the CH-47A Chinook, which first flew in 1962.

The Boeing MH-47G is the "Special Operations" variant of the Chinook. It has many of the features of the modern CH-47F, but differs from its' Sister model with the incorporation of combat systems designed to make the helicopter more survivable on missions deep into enemy territory, at night and while flying at low level. It is primarily used for he insertion, extraction and resupply of Special Forces troops while in service with the US Army Special Operations Aviation Command (USASOC). The first new-build MH-47G helicopter was delivered to the U.S. Army in September 2014.

The MH-47G features a machine-framed fuselage with integrated long-range fuel tanks, and an extendable refuelling probe to receive fuel mid-air from fixed-wing tankers suck as the KC-130 Hercules. The helicopter also posses advanced cargo-handling capabilities. It is well armed with two M134 7.62 mm electrically operated air-cooled mini guns and two M240 7.62 mm belt-fed machine guns mounted on either side of the fuselage at a Forward Looking Infrared (FLIR) sensor, and a multi-mode radar. Also fitted is a missile warning system, engine heat suppressors, and an infrared radar jamming system with associated chaff and flare dispensers for defence against missiles.

The helicopter has been fitted with special operations equipment such as a Fast Rope Insertion Extraction System (FRIES) that can lower or lift 8 soldiers at the same time without landing, a Special Patrol Insertion and Extraction System (SPIES), a rope ladder, and an electrically powered rescue hoist and a Personnel Location System (PLS) to find downed pilots or Special Ops personnel.

The 160th Special Operations Aviation Regiment (Airborne) of the U.S. Army has a requirement for 61 MH-47Gs. The MH-47G modernisation programme is aimed at delivering a mix of remanufactured and new MH-47Gs to the USASOC. Block II new build MH-47Gs will be delivered by Boeing to the U.S. Army starting in 2021.

Nicknamed the "Night Stalkers" the 160th SOAR(A) is headquartered at Fort Campbell, Kentucky.