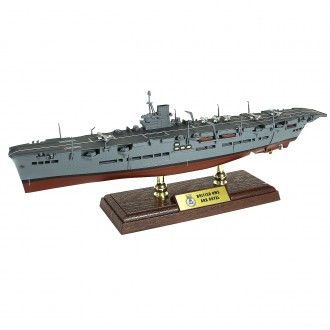 HMS Ark Royal was the first purpose built large aircraft carrier to be completed for the Royal Navy, and one of the most famous warships of the Second World War. Part of her fame came from repeated German claims to have sunk her, she was built in 1938, it was the third to bear the name but the first purpose built aircraft carrier specifically designed for providing air support. Ark Royal and her 1400 strong crews were deployed to counter the U-Boat operations off the coast of the UK and Ireland, and then later in the war helped in the sinking of the German battleship Bismarck. On the 10th of November 1941 off the coast of Spain, the Ark Royal was struck by a torpedo on her starboard side,, although attempts were made to save her the damage was too severe leading to water flooding into the lower decks.

This superb Forces of Valor replica is made from die-cast metal with plastic parts. Features include fleet of aircraft, Die cast metal hull and wooden look display stand with chrome plated metal pillars. Beautifully presented in a display box this model is a must have for ship and military collectors.