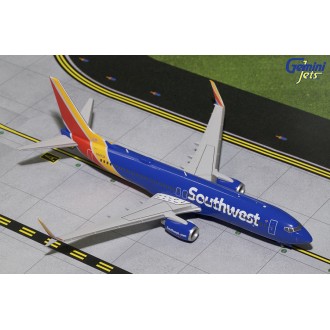 Southwest Airlines is a major US airline, the world’s largest low cost carrier, headquartered in Dallas, Texas. The airline was established in 1967 by Herb Kelleher and adopted its current name, Southwest Airlines, in 1971.Southwest Airlines has used only Boeing 737s, except for several years in the 1970s and 1980s, when it leased some Boeing 727s. Southwest is the largest operator of the Boeing 737 worldwide, with over 700 in service, each averaging six flights per day.

Gemini 200 by Gemini Jets are a range of diecast metal airliners in a bigger 1/200 scale.  All models are limited editions and highly collectable.

Can be displayed with Landing Gear up or down.

The approximate measurements of this model are Length 19cm. Height 6cm. Wingspan 18cm.