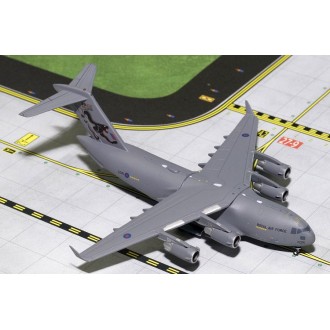 The original lineage of the C-17 dates back to the early 1970’s when the United States Air Force needed a single aircraft that would combine the load capability of the C-141 Starlifter & C-5 Galaxy transport aircraft, yet have the versatility of the turboprop C-130 Hercules.  First flown in September 1991 the C-17 is now the USAF’s most important aircraft.  The Royal Air Force has been operating the C-17 since 1991 and it is now the backbone of the tactical transport fleet.

Gemini Macs models are produced in limited editions of no more than 2,500 pieces and are highly detailed collectibles that come fully assembled and ready to display.