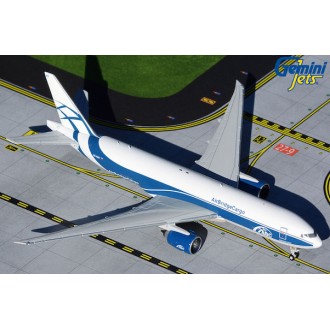 The Boeing 777 is a long-range wide-body twin-engine jet airliner developed and manufactured by Boeing Commercial Airplanes. It is the world's largest twinjet and has a range of 5,240 to 8,555 nautical miles.

AirBridgeCargo entered the scheduled cargo market in April 2004 when the first AirBridgeCargo branded Boeing 747 made its inaugural commercial flight on route from Beijing to Luxembourg. This milestone for Volga-Dnepr Group was the realization of two years of preliminary work to build the airline's fleet, network, management and personnel. During two years of follow-up ABC continued its development with expansion of network in Asia and Europe and enlargement of its Boeing 747 freighter fleet. In November 2006 AirBridgeCargo received its own air operator's certificate, thus becoming an independent scheduled cargo airline within Volga-Dnepr Group. The carrier was the first Russian company to deploy Boeing 747-400F and Boeing 747-8F into its fleet in 2007 and 2012 respectively and to start transpolar flights on the Hong Kong – Chicago route.