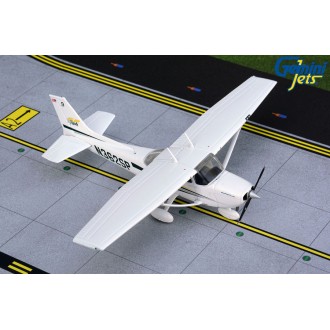 The Cessna 172 Skyhawk is an American four-seat, single-engine, high wing, fixed-wing aircraft made by the Cessna Aircraft Company. First flown in 1955, over 44,000 have been built - more than any other aircraft. The Cessna 172S was introduced in 1998, Marketed as the Skyhawk SP and is powered by a Lycoming IO-360-L2A engine producing 180 HP, an increase in engine RPM of 300 over the R model resulted in a 20 HP increase to power output.

Gemini General Aviation are diecast metal aircraft in a bigger 1/72 scale with features including rolling landing gear, moveable propeller and clear cockpit windows. All models are limited editions and highly collectable. Registration-marked packaging is personalized to each aircraft to enhance its collectable value.