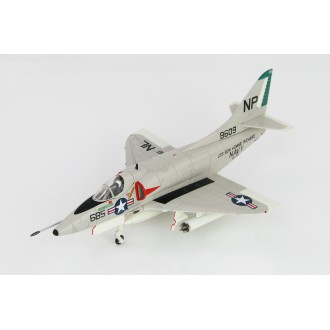 The A-4 Skyhawk is one of the most successful attack aircraft ever built. It is the smallest jet aircraft ever deployed on a carrier and was the product of Douglas's Chief Engineer Ed Heinnemann in 1952 when a more lightweight aircraft was in demand to fit into post-war vintage carriers. The Skyhawk was extensively used during the Cold War period and the Vietnam War by the Navy and the Marines.

This aircraft Douglas A-4C Skyhawk 148609 c/n 12802 VA-76 was deployed to Vietnam on board the USS Bon Homme Richard when on May 1, 1967 LCDR Ted Swartz flying 148609 shot down a MiG-17 over North Vietnam with an unguided Zuni missile making this the only time a Skyhawk scored an air-to-air victory during the Vietnam War. 148609 was lost in June 1972 after a mid-air collision.

This model has a wingspan of 11cm and is 18cm long.