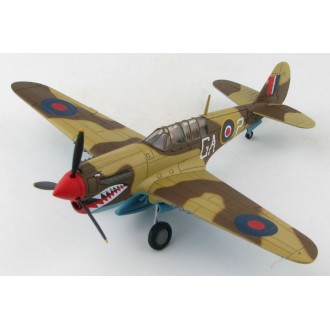 The Curtiss P-40 Warhawk first flew in 1938 as a modification of the Curtiss P-36 Hawk. Warhawk was the official U.S. designation while the name Tomahawk was used by the British Commonwealth and Soviet forces for the P-40B and C and Kittyhawk for P-40Ds and later variants. The P-40 was first used by British squadrons in North Africa and the Middle East in 1941. The P-40 lacked a two-speed supercharger making them inferior to German aircraft but was an adequate fighter in low altitude combat zones. Almost 12,000 P-40s were produced.