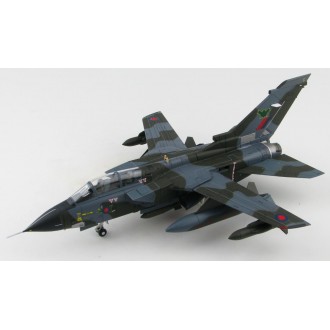 No. IX Squadron was formed in December 1914 to spot for artillery and reconnaissance and later became a specialist bomber unit. The IX has flown 10 different types of bombers including the Lancaster they used to help sink the “Tirpitz”. In 1982 IX moved to Honington and became the RAF’s first operational Tornado Squadron. Panavia Tornado GR1 BS035/105 ZA592 was first flown on January 11, 1982 and delivered to the RAF on February 19, 1982. The aircraft was later upgraded to a GR4 and scrapped on February 24, 2017.

The Panavia Tornado was a joint effort between the UK, West Germany and Italy to produce a two-seat, dual-engine aircraft with variable-sweep wings. The Tornado took its maiden flight on August 14, 1974 with the first aircraft being delivered to the German Air Force on July 27, 1979. There are three main variants of the Tornado, the IDS (interdictor/strike), ECR (electronic combat/reconnaissance) and ADV (air defense variant) interceptor. By the end of production in 1998 there had been 992 aircraft of all versions built of which 745 were IDS variants.