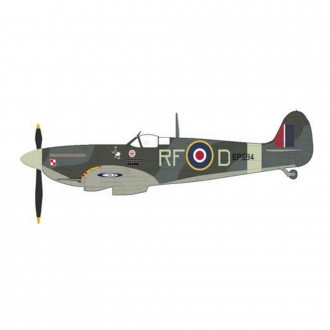 This product is pre order, we expect to have it by November 2021 - order now and it will be shipped to you as soon as we receive it.

The 303 "Kościuszko" Squadron was a Polish-manned Fighter Squadron and part of the RAF. During the Battle of Britain the 303 Squadron recorded more victories than any of the other 66 allied fighter squadrons. The 303 Squadron Leader was Jan Zumbach who scored eight victories during the BoB. EN951 was the last of three different Spitfires Zumbach had flown. The victory markings on his aircraft were German crosses outlined in white for confirmed victories and red for probables. Zumbach ended the war with 13 1/3 victories.

The first Spitfire Mk V was produced in January 1941 and proved to be as good as the Mk III and less complicated. The Mk V was the most produced variant of the Spitfire and the main version throughout 1941 and was a better aircraft than the Bf-109 but that all changed with the introduction of the Fw-190. The Mk V remained the RAF fighter through the summer of 1942 and saw several variants developed using bigger engines, new wing types and more armament. There were 20,351 Mk V aircraft built in all variants.