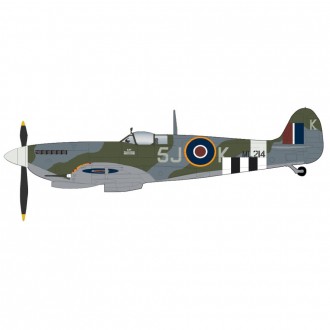 In May 1944 the 126 (Persian Gulf) Squadron was equipped with the Spitfire IX and providing fighter escort for bombers over north-western France as well as protection for the growing armada being assembled for D-Day. In July 1944 the 126 was stationed at Harrowbeer and Squadron Leader Johnny Plagis was Commander flying Spitfire IX “5J-K” ML214; that wore Kay after his sister and Muscat, a city in Oman. In July and August Plagis scored four victories but in September he was hit by flak and survived but the aircraft was lost.

The Mk. IX replaced the Mk. V in June 1942 and on September 12, 1942 a Mk. IX brought down a Ju-86R flying at 43,000 feet. Another major achievement of the Mk. IX took place on October 5, 1944 when 401 Squadron became the first allied aircraft to shoot down an Me-262 jet. Even with the arrival of the Griffon powered Mk. XIV the Mk. IX continued in service until the end of WWII. There were 5,665 Mk. IX Spitfires and its variants produced.