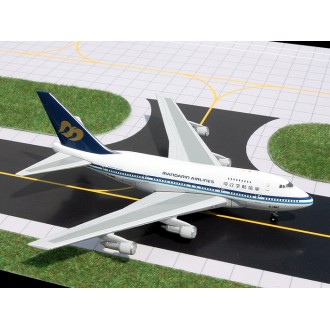 Boeing 747SP Special Performance was designed to meet a 1973 joint request from Pan American World Airways and Iran Air for a long-range high-capacity airliner. The SP variant had a fuselage that was shortened by 47 feet while retaining the engines and fuel tank capacity which gave a higher speed and longer range than existing 747 variants. The 747SP first entered service in 1976 and in the years that followed, its record-setting range enabled Pan Am to offer the longest non-stop flights in the world, including New York - Tokyo, San Francisco - Hong Kong and Los Angeles - Sydney. Mandarin Airlines is based in Taipei, Taiwan, whose parent company is China Airlines. The Taiwanese carrier operates domestic and regional international flights, while its parent company focuses on international operations.

This model is approximately 14cm in length, with a wingspan of 15cm.