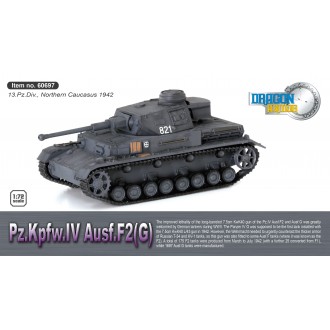 The improved lethality of the long-barreled 7.5 cm KwK40 gun of the Panzer Pz.IV Ausf.F2 and Ausf.G was greatly welcomed by German tankers during WWII. The Panzer IV G was supposed to be the first tank installed with the 7.5 cm KwK40 L/43 gun in 1942. However, the Wehrmacht needed to urgently counteract the thicker armour of Russian T-34 and KV-1 tanks, so this gun was also fitted to some Ausf.F tanks where it was known as the F2. A total of 175 F2 tanks were produced from March to July 1942.