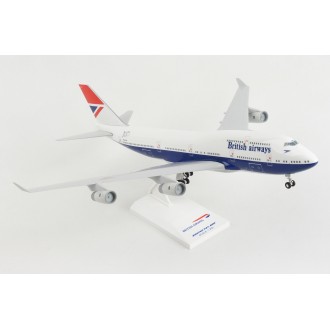 The British Airways Negus livery which was used between 1974 and 1984. As BEA (British European Airways) and BOAC (British Overseas Airways Corporation) merged to become British Airways in 1974, elements of both of their liveries were incorporated together to create this new livery, designed by creative agency Negus & Negus. The modern and fresh design was based on the British national colours of red, white and blue. It featured a streamlined evolution of the BOAC and BEA insignia by way of a quartered Union Flag with a red tip on the tail fin and the Speedbird symbol on the nose.

This model features solid injection moulded plastic construction with highly detailed graphics. All models assemble in minutes and include a display stand.  Model is approximately 35.6 long with 29.9 cm wingspan.