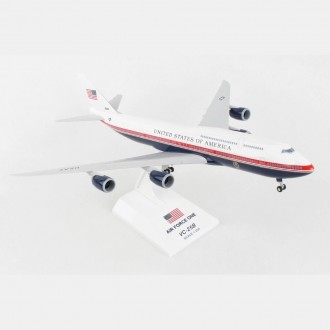 the VC-25B program began modification on the first of two Boeing 747-8 aircraft which will be the future Air Force 1, estimated to be in service in 2024, replacing VC-25A which was introduced in 1990. VC-25B is planned to be in service until at least 2054. In 2019 the US Defence Department estimated the cost of VC-25B to be $5.2 Billion. This is the first time the livery colour theme has changed since Air Force One was first introduced in 1962.

The first phase of aircraft modification involves cutting out large skin and structure areas in both the forward and aft lower lobes of the aircraft and then installing two newly manufactured superpanels. The superpanels contain structural upgrades and cutouts for the VC-25B lower lobe doors including internal airstairs for mission requirements.

The VC-25B modifications to the 747-8 aircraft will include electrical power upgrades, a mission communication system, a medical facility, executive interior, and autonomous ground operations capabilities.

This model features solid injection moulded plastic construction with highly detailed graphics. All models assemble in minutes and comes with a stand and landing gears.