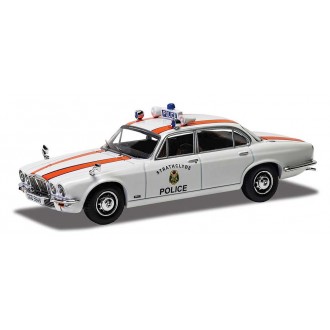 The Jaguar Mk2 3.8-litre brought unmatched power and performance to the compact saloon market in the early 1960s and became a firm favourite among the officers who drove them. Many forces remained loyal to Jaguar and adopted the groundbreaking 1968 XJ6 as a traffic car to patrol Britain’s then rapidly expanding motorway network. The example modelled was one of the last two XJ6s Series 2s purchased by Dunbartonshire Constabulary. It is, however, presented in the livery it wore after May 16th, 1975 when Strathclyde Police was created by amalgamating eight forces into one unit matching the border of the then new Strathclyde Regional Council

Corgi Vanguards, a series of die-cast 1:43 scale model automobiles spanning half a century of motoring in Britain. Each model carries a detailed, authentic livery and comes complete with a miniature history of the vehicle and its engine performance.